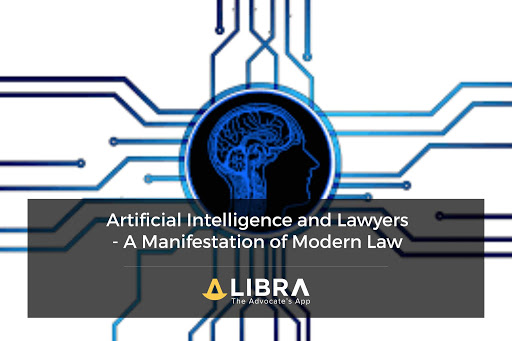 Artificial Intelligence and Lawyers- A Manifestation of Modern Law

Humans are well versed in the art of recreating natural things in the form of artificial technologies. The latest addition to the anomalies created due to this addiction is Artificial Intelligence, that is programmed to replicate human intelligence. Artificial intelligence is used as a substitute for the human mind and is believed to surpass the activities that could be done by an extraordinary brain.

These artificial intelligence technologies have slowly started to replace humans in every profession. We have machines doing surgery on fruits, managing traffic and what not? Artificial intelligence could be summarised in one simple sentence; A machine with the mental and physical ability of a hundred men along with the power to think on its own. Though these machines were invented to make life easier by assisting humans, there has now come a point where humans are being taken over by these machines.

Comparatively, the legal profession is the least affected of them all. After all, lawyers are meant to follow their conventional methods which allow for the lesser intrusion of technologies into the field. Despite these barriers, however, artificial intelligence tore its way through the legal profession and over the past 10 years of trying to incorporate technology in law, AI has reserved its spot at the heart of modern law.

The relevance of AI in Law:

Be it a commercial lawyer or a practising lawyer with a lot of litigation experience, they all have one common feature: Researching and providing insights into cases. To be a good lawyer, one needs to be a voracious reader and have the ability to understand and discrete the relevant points from the case. It often takes time to be done efficiently and also very expensive. The clients are usually affected by this increased cost and moreover, the business market is also altered when lawyers cost too much.

The recent developments in legal artificial intelligence technologies are that the machines do the research for the lawyers. A process that took days or weeks to be done efficiently by a number of lawyers can now be done in a couple of minutes at the push of a button. The technology reads through the documents and has streamlined data that has been analysed according to priority. The lawyers who would have to otherwise spend days together to find out the precedents and organize the relevant information within minutes. The workload of the lawyer has now been reduced fourfolds which has in turn given them more time to have a face-to-face with the client, appear in courts and negotiate new deals too.

The basic concept of using artificial intelligence in any profession for that matter is to bring out maximum efficiency of work with minimum efforts. All developments and discoveries have been made in that aspect for the betterment of the legal field. Somewhere around the way, this artificial intelligence operated robots have acquired the status of having their own AI ethics structured. Legal researchers have started to discuss the necessity of having laws governing the use of Artificial intelligence in various fields and how the usage could be limited to avoid any predictable mishaps.

The clients seeking legal advice these days belong to the generation of people who prefer ordering food online and get it delivered at home, they are driven by the idea of comfort and personalization. AI, on the other hand, is promising exactly that, legal expertise in a convenient form. This attracts a lot of clients who would rather prefer the AI run firms than the conventional human run time-consuming firms. Meanwhile, the business market is driven by competition and the desire to sustain its position among many other legal professionals. The companies with too much information need to streamline their resources and make it client friendly during delivery of the service. That problem is resolved by the AI technologies which make them the buzz word of the market.

So, the lawyers and attorneys representing firms need to understand the deep inter-relation of these machines and the legal field. They play the intermediary role of adapting to whatever the market has to offer and what the clients desire. They are stuck between satisfying their clients with what is being provided in the market. With the improvement of technology, the legal market is being infested by AI trained machines and the jobs of lawyers are made easier by the minute. However, with the little knowledge of how machines and algorithms work, lawyers usually don’t fess up to encourage such implementations.

Well, that is a myth! What we see in recent times is the evolved form of AI which was actually present in the field for the past 10 years, growing from its most primitive forms. The legal scholars helped develop such an enormous platform by consolidating years of data, personal experience and training unto the AI technologies that have now grown to help and assist the lawyers of the present day. This evolution shows how lawyers have actually contributed to this state of AI technology legal industry. The point is, lawyers need not worry about adapting to something as new and complex as AI in their industry because they were the reason behind the growth and implementation of such technologies in the field.