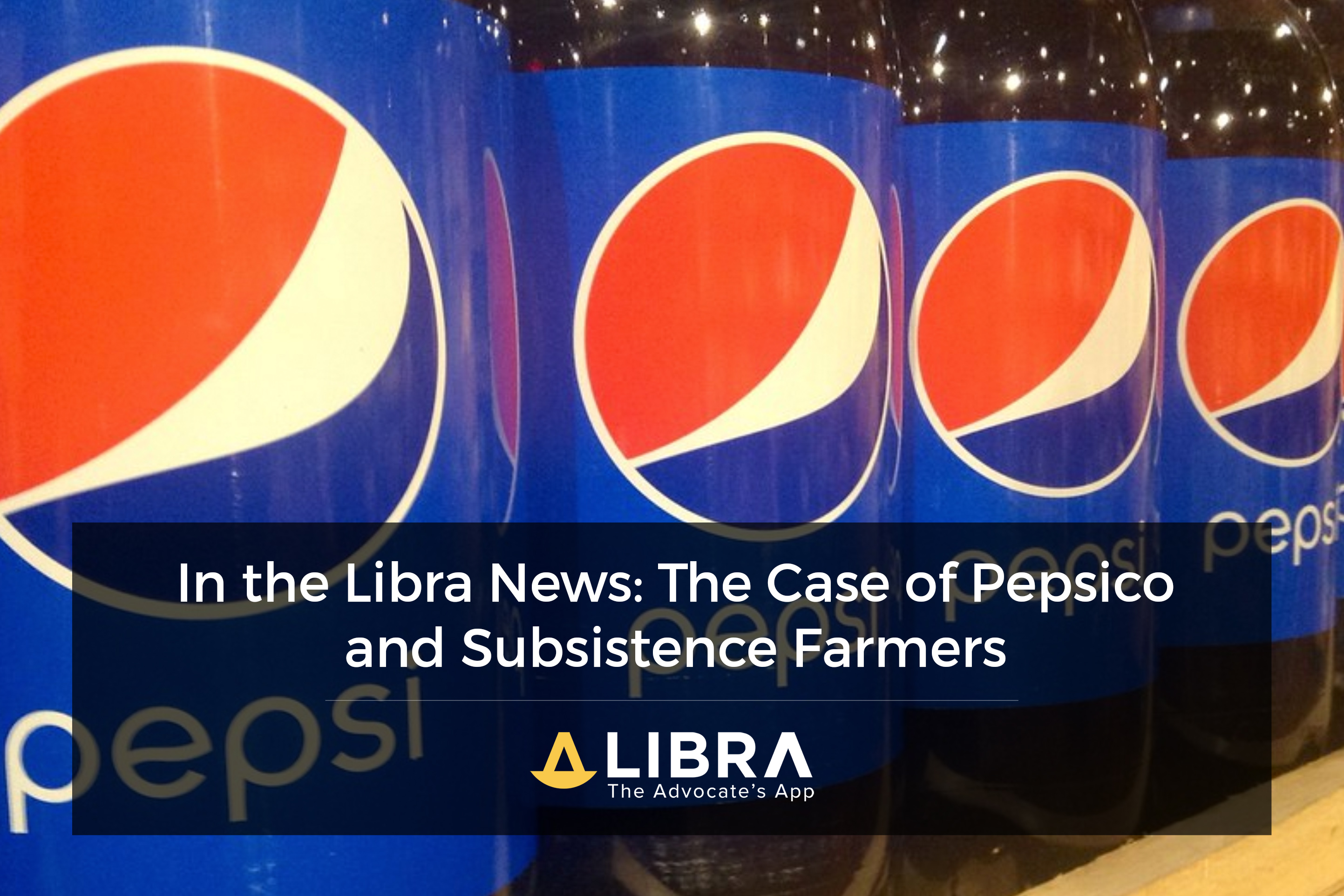 In Libra News: The Case of Subsistence Farms and PepsiCo

The suit by India’s manufacturing giant-PepsiCo has taken the country by a firestorm. The case relates to a special spud designed by PepsiCo for the Lays Chips. The stud was helpful in manufacturing the highest quality of premium chips by eliminating moisture. Therefore, given the different technique that it employs, only subsistence farmers who have a licensing agreement with the corporation-PepsiCo are allowed to use these tubers.

This was the primary contention of PepsiCo in initiating the lawsuit. On the other end of the suit, there were farmers, who allegedly were using these unique tubers without the permission of the organisation. They were of the view that Iot is only the might of the organisation that is speaking and it is only being done to bully the small cultivators. After having initiated the suit, lately on the 3rd of May, 2019, PepsiCo has decided to take back the lawsuit, while the small cultivators and farmers are looking at it as a victory for themselves.

With this, all eight cases against 11 farmers of north Gujarat have been withdrawn by the foods and beverages giant. On Friday, after having sought and obtained an early hearing in its cases against four potato growers in the Commercial Court of Ahmedabad and five farmers in district court of Modasa, the company decided to withdraw their legal suits. As per the All India Farmers’ Forum [AIFF], the Indian agricultural laws protect the farmers’ rights to grow and sell registered crops. Moreover, the AIFF  called for a nationwide boycott of Lays and PepsiCo products. It demanded that PepsiCo withdraw its lawsuits and “apologize to the peasants of India.” Now that the company has announced it’s dropping the claims, AIFF has declared “a significant victory in the struggle for protecting farmers’ seed freedoms.” The growers’ group attributed this victory to its boycott efforts and wants more clarity from the corporation on how it will approach seed freedom in the future. It demanded that PepsiCo “come clean and walk the talk or brace for more intense protests.”

On the issue of revoking the suit, an official from the PepsiCo told in an interview that:

“After discussions with the government, the company has agreed to withdraw cases against farmers. We are relying on the said discussions to find a long-term and an amicable resolution of all issues around seed protection’

However, there has been no other official record of why the organisation took back the lawsuit. One of the probable reasons could be that as the case primarily based upon the intellectual property rights, it often complicates matters and the organisation might not be seeing a clear victory at the end of the tunnel. After the revocation of the suit, it seems as if the tables have turned. Earlier, the company, for the infringement of its patent, was demanding $143,000 from each farmer alleged. The cultivators operate small farms, consisting of only a few acres, and would have been unable to pay if PepsiCo had been successful in its claims. Now the AIFF says PepsiCo should pay the farmers “exemplary compensation” for having sued them to begin with. The organization wrote in a statement,

“We also demand an unconditional apology from PepsiCo for such blatant violation of farmers’ seed freedoms.” Sign up for the Quartz Obsession email Enter your email Sign me up Stay updated about Quartz products and events.

Moreover, the advocate of the farmer- Mr. Alka Yagnik also remarked on the withdrawal of the suit as follows:

“Rarely it happens that multinationals withdraw legal suits against marginalised and downtrodden. These farmers are into subsistence farming and not commercial farming. This is the first instance where PepsiCo has withdrawn suits not only against farmers of Sabarkantha but also against Arravali and Banaskantha, and with this withdrawal, the ill-conceived initiative of PepsiCo to threaten farmers with litigation and brow with them has come to an end”

As per him the struggle clearly was between the right of a farmer to cultivate land and agricultural produce and the right of multinational companies seeking protection in the name of registration. He said that the former has clear and unchallenged supremacy because laws in India allow farmers to use even registered seeds and take produce with the only exception that farmers are not supposed to sell registered seeds resorting to any type of branding or labelling.

Published in legal and legal news