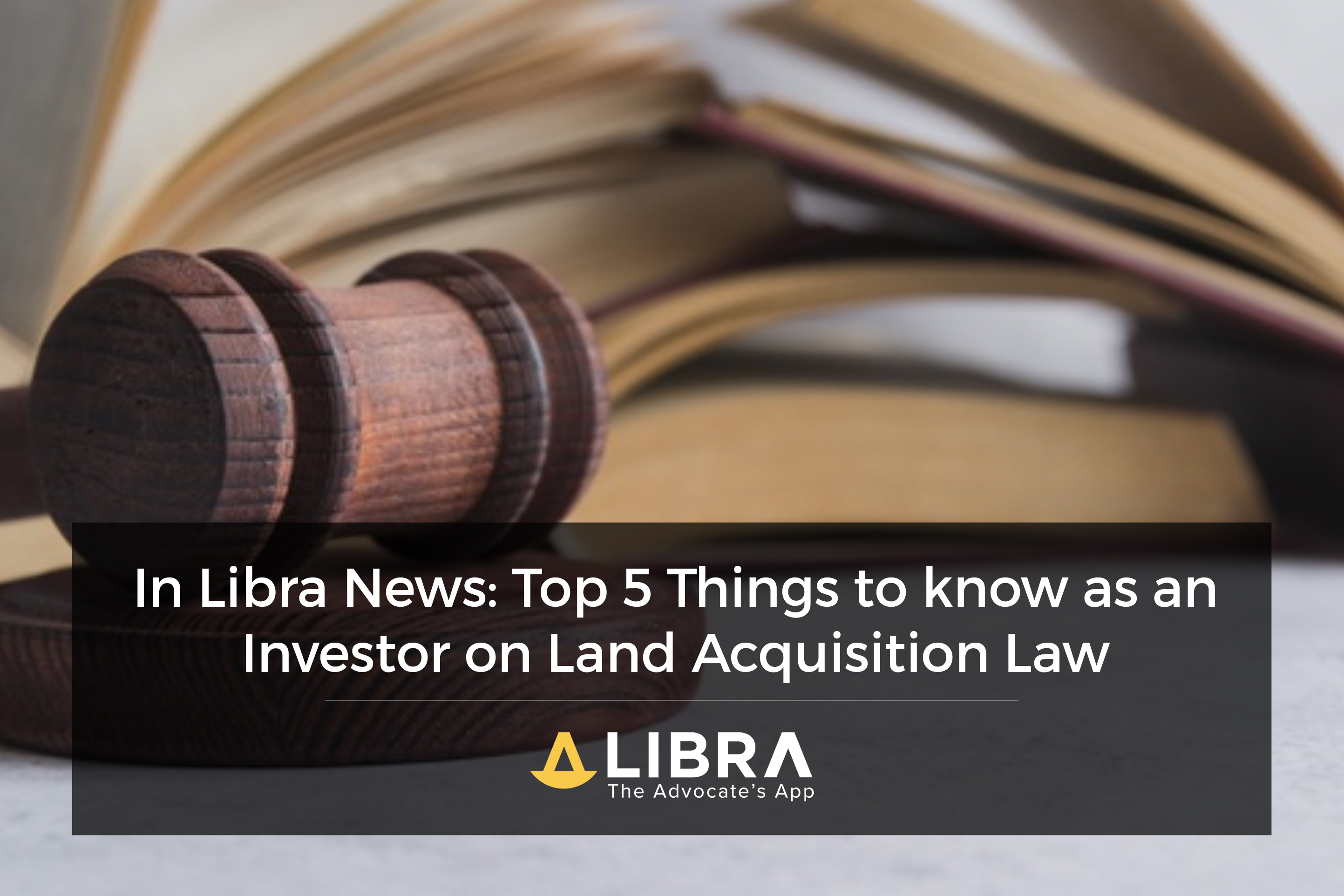 In Libra News: Top 5 Things to know as an Investor on Land Acquisition Law

Land acquisition is a significant investment and hence, must be pursued with the utmost caution. Several experts feel that it is the most massive bottleneck for companies who are vying for an opportunity to invest in the ever-growing Indian market. The fact that it is not the most accessible commodity to buy, sell and trade within stipulated periods of time has resulted in it being shunned by investors who want to make some quick money.  India has several laws to deal with land transactions and navigating through them might be quite a messy deal, and that’s why we are here to help you. Here’s a look at some of the basic things you ought to know regarding the land acquisition laws in India.

The Center for Policy Research, which is a think-tank based in Delhi, recently did a study on the land acquisition scene in India. They concluded that there were over 1200 laws related to land issues in India, and this was without giving heed to over 150 central rules regarding transactions in eight of the twenty-nine states that make up our country. Just the sheer volume of legal documentation concerning land acquisition is tiring to look at, much less the hundreds of tribunals and special courts for settling such issues and all the orders passed by them.

The Right to Fair Land Acquisition Act of 2013 was a landmark decision that cleared India of several outdated laws. Up till the passing of this Act, land deals in India occurred according to the archaic rules laid down by the British in their the Land Acquisition Act of 1894. The UPA government introduced this Act aiming to make it easier to develop projects in defence production, rural building, industrial growth, and Private Public Partnership and to reduce the restrictions placed on such endeavours. But, since its inception, several people have pointed out various flaws in the system and how it is not one that is easy to follow procedurally.

The consent clause mentions that approval from at least 80 per cent of the families who will be affected if the land is acquired is required for private entities and 70 per cent has to be procured for public-private partnerships to buy the property. Public enterprises need no such consent.

All acquisitions that occur for a private purpose require, which will lead to the loss of land of minority groups or other citizens will require the concerned companies to ensure and provide the necessary rehabilitation and resettlement. If the owners are of the SC or ST castes, then one-third of the compensation must be provided before the deal is legalised and the remaining after the process if completed officially. If a government body has to acquire land owned by such tribes or castes, it can only be done in exceptional cases and would require permission from Autonomous District Councils. Also, the area will have to be developed within five years to make sure that their livelihood remains safe.

Compensation must be paid in cash of the order of four times the actual value of the property as per the market in rural areas and twice in urban areas. A one-time settlement must also be offered to artisans and traders who do not own any land if they are affected by the acquisition.

An SIA survey will examine the need for acquisition and also will look into the payment of the compensation and will work to ensure that everything occurs as per the guidelines as mentioned in the Act. The SIA must interact with, and receive consent from artisans, labourers and tenant farmers who will be affected by the acquisition. This assessment, while safeguarding the livelihood of several people, leads to slower and more expensive acquisition deals which are not favoured by investors.

If the land remains unused for five years, the Act allows the state to hand the property back over to either the owner or the state land bank. The entire process is estimated to take over 56 months and hence is a long and tedious process.

As several points are not clearly mentioned in the Act, several states have drafted their own laws to handle land acquisition issues that arise in their states. These include:

Gujarat and Telangana laws have allowed several projects to bypass the SIA and so many such plans do not have the consent of landowners. Projects related to affordable housing, industrial corridors, national security and defence have been given the go-ahead even without the mandatory papers and documents.

Maharashtra has exempted PPP projects from both the SIA and consent clauses while Telangana, Uttar Pradesh, and Andhra Pradesh, reduced the period for SIA public hearings from three weeks to one in an attempt to speed track the process. While these efforts help in certain aspects, the legal challenges associated with acquiring law remains unaffected at large.