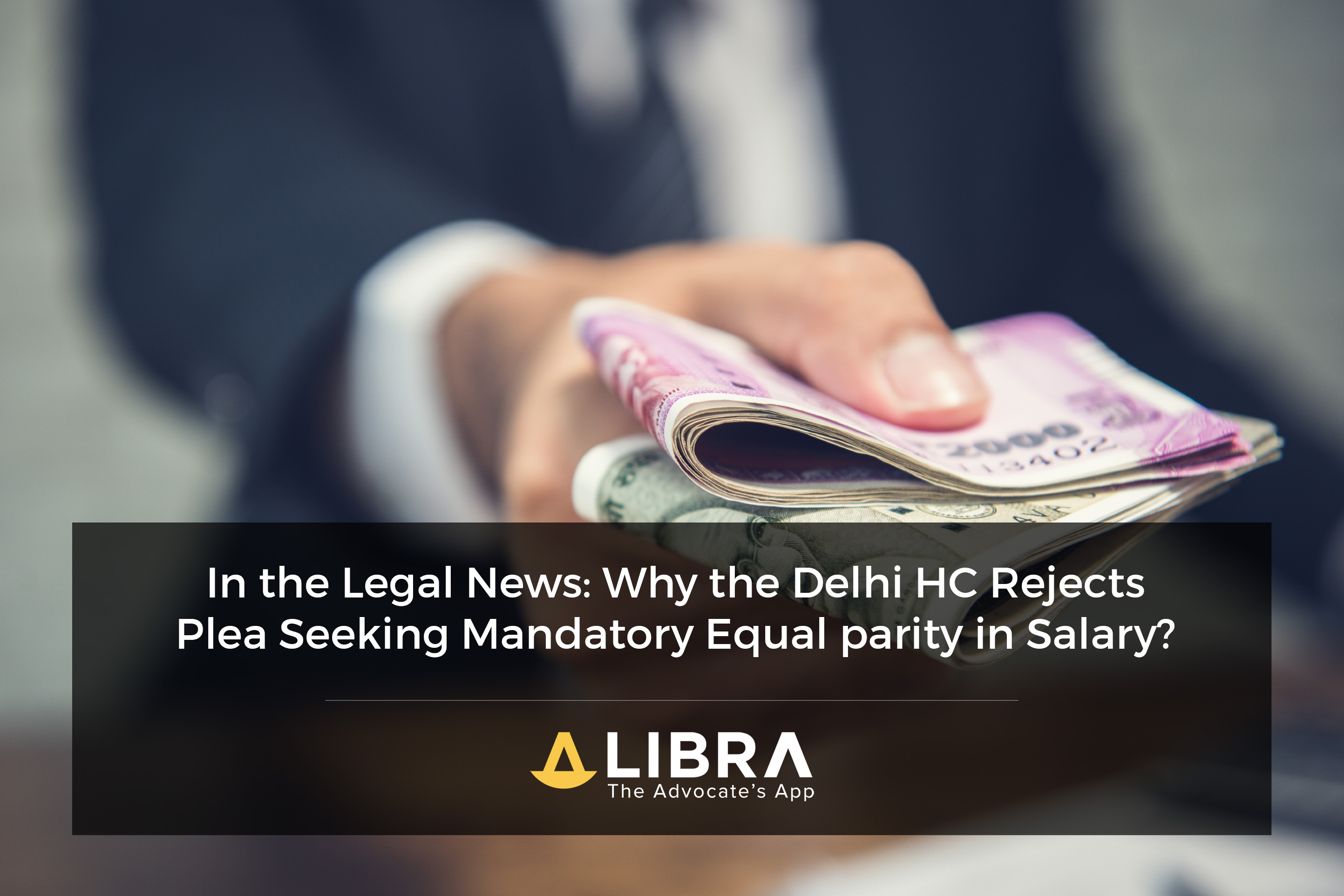 In the Legal News: Why the Delhi HC Rejects Plea Seeking Mandatory Equal parity in Salary?

Recently, the Delhi High Court rejected an order under VII Rule 11, of the CPC, 1908 of an Indian employed in the Italian embassy who raised concerns over contention for pay at par as per Article 157 of the Italian Presidential Decree No. 103 which came out on April 7, 2000. The petitioner requested the court to order for the full repayment of the arrears induced along with damages and other compensation.

Meanwhile, the defendant called for support of section 86 of the CPC, 1908 which explains rules regarding the payment of salaries and the registration of cases against a foreigner. He stated that the petitioner falls under no category as mentioned under section 86, CPC, 1908 and is hence not liable to receive a judgement in favour of his application. He consequently requested the judge to reject the plaint of the Petitioner. The petitioner used the following cases in support of his defence:

The cases as mentioned above saw judgements that upheld the rights as specified under section 86 of CPC, 1908 wherein a foreign national is provided specific legal protection against litigation. The article also discusses that in such cases, the court has the right to dismiss the plea if it deems right to do so in the initial stages of the declaration of the suit.

The counsel consisting of Advocate Jaiveer Shergill claimed that the plea does not have any such limitations as the suit discussed the discrimination faced by the petitioner in the hands of the defendant.

The counsel for the plaintiff argued that judicial inquiry was restricted to discussing the points mentioned in the plaint and that the court must start proceedings by assuming that the details furnished are valid at all costs. All further investigations must be conducted by keeping in mind this assumption as the result must be to determine whether the plaint is supported by law or not. He also stated that the court need not look into the Central Government decision’s validity as the permission for doing the same has already been provided by the Central Government. He also supported this argument by pointing out that Article 154 and Article 157 recommends his case strongly.

The court heard both sides of the claim and found that the defendant raised good claims as it believed that the powers vested in the Central Government should be used to deliver verdicts that are in accordance to the principles of natural justice that it is expected to follow. It further stated that while section 86(6) of CPC, 1908 gives the Central Government the power to refuse a hearing, doing so is unconstitutional and hence, foreign nationals deserve the right to have a proper trial. It also enumerated that as per Order VII Rule 11 CPC wherein application has documents which are to be annexed and have to be verified, the authority has to consider them correct unless otherwise proven under Section 86(2) of CPC.

The court stated in the final reading of its judgement that the present plaint is based on the Italian Presidential Decree and that as far as a municipal court is concerned, its judiciary is defined by domestic laws as stated in the IPC. Article 154 grants to such courts the power to make judgement calls and settle disputes that arise within its jurisdiction. The court argued that the Respondent was wrong in stating that the plaint is limited in a similar fashion. The court judged that Article 157 grants a valid pay parity between citizens of a native country employed by a foreigner. Article 157 also defines that the annual remuneration must be mentioned in the contract signed by the individual and that it must be decided based on the standard of living, cost of living in the employing nation and also the nature of work being done. Hence it deemed citizens employed in Italy and India to be of different categories and therefore stated that the pay parity was a valid one.

This led to the court rejecting the plea asking for equal pay as it believed that individuals working in foreign countries were subject to different conditions of life and work and are hence separate entities which cannot be compared. This verdict has been seen as a landmark judgement that will decide in the future how individuals will be paid in different nations in the years to come. While such plaints have been filed before in the past, this decision taken by the Delhi HC lays to rest all doubts regarding the parity in pay once and for all.

Published in legal news and Trends