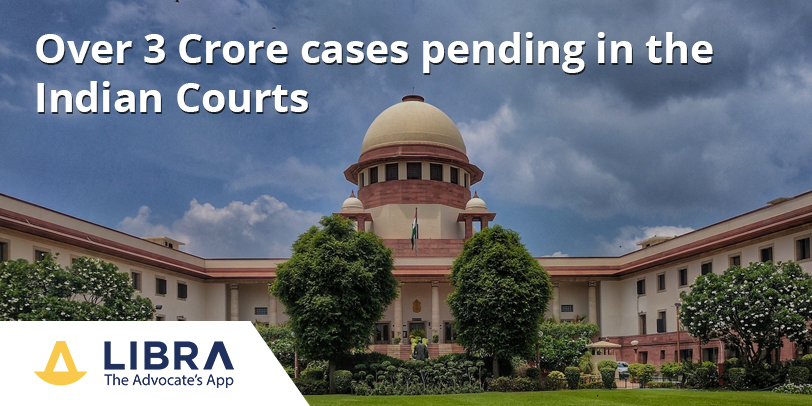 Over 3 Crore Cases Pending in the Indian Courts

Going by the famous saying, Justice delayed is justice denied. However, the delayed justice in Indian Courts has not gone unnoticed. Judicial Backlogs have always been at the top of the concern list. There have been immense researches to identify the bottlenecks of delayed justice and the means of correcting the system to render the situation better. By a rising number of pendency it has been made clear by the former Chief Justice of India, Hon’ble Justice Deepak Misra, that the backlogs are close to touching approximately 3.3 crores. The implications of the backlogs aren’t just numerical, rather it spreads itself to touch upon the rights of others involved in these many cases.

Despite immense research of this topic, any categorical factors pushing back the administration of justice has not been identified. One of the many reasons that emerge is that the rate of filing cases is much more than the rate of case disposal. Moreover, in most of the sample cases, it has been observed that it is only the technical formalities and paperwork that take up most of the time.  Moreover, unresolved cases often implicate within the process the under-trials, whose guilt hasn’t either been proven or denied completely. It has been seen that some of the innocent acquits end up a long time period in jail, just in the process of getting justice for themselves. As per PRS Legislative, a leading research institution in the country, there were over four lakh prisoners in jail (As of on 2015) and of them 2/3rd (constituting to 2.8lakhs of prisoners) were undertrials.

This pressing issue just makes us rethink the entire process of administration of justice and whether we are doing it right. Most of it can be attributed to understaffing in the lower judiciary, technical complications of filing and drafting, unnecessary adjournments, absconding of the accused and decreased efficiency at the stage of the trial. An analysis of the situation prevailing at present, also shows that the number of backlog cases will only continue to grow, given the present status of the Judiciary. The Judiciary is often looked up as the guardian of the society, which is often the go-to in cases of injustice and distress. However, the question here is whether the judiciary is worth all the trust the people are placing on it. Here are some of the reasons and the way-out to judicial backlogs in the populated country of India

The way-out of this web of backlog is not straight. There has to be a multilateral approach to defend the lethargy, power-politics and many other underlying reasons. Moreover, it requires an administrative overhaul to simplify the procedure involved and accelerate the road to justice.

Published in Featured and lawyer