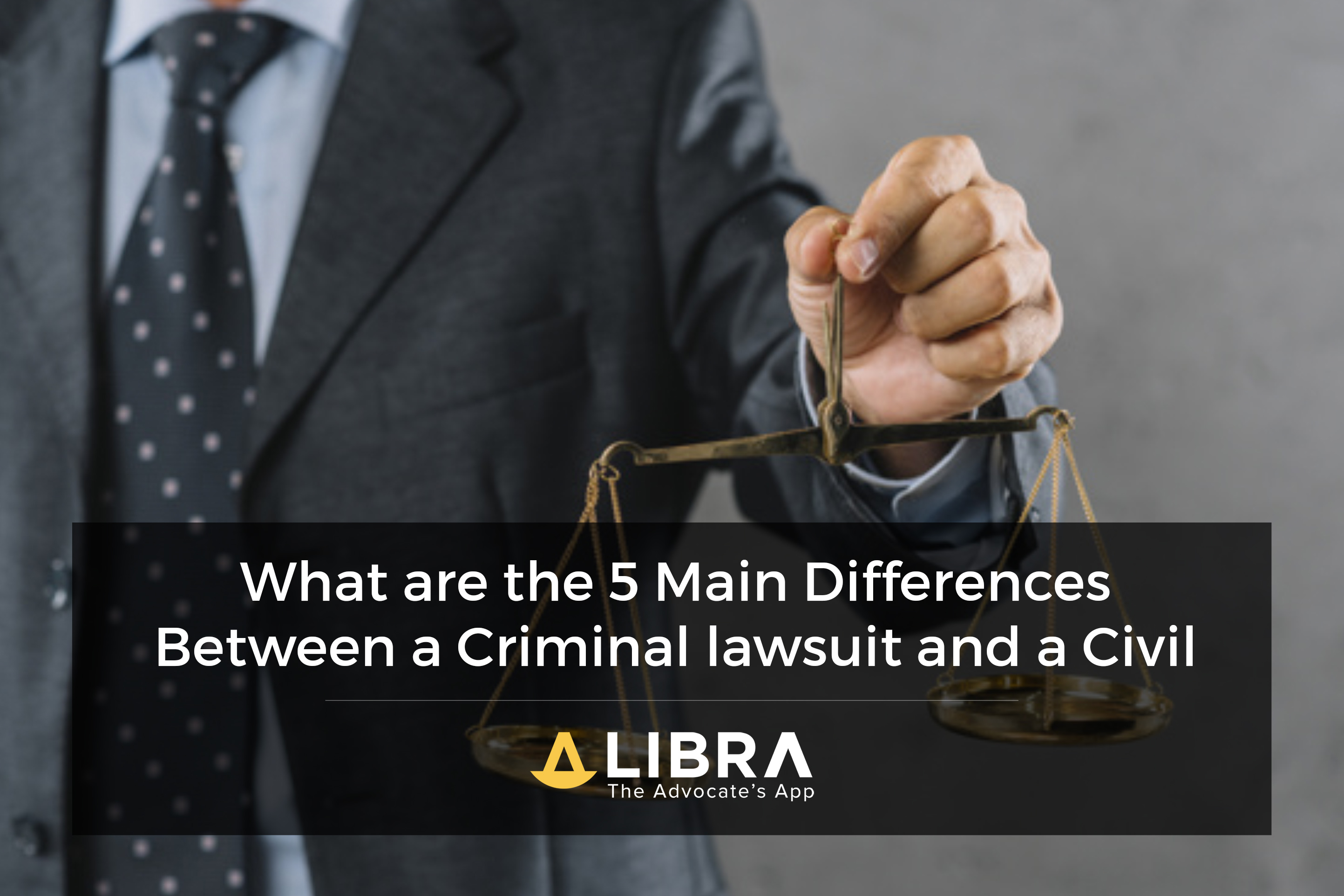 What are the Main Differences between a Civil Lawsuit and a Criminal Lawsuit?

Civil cases consist of a conflict between institutions or individuals, majorly over money. A civil suit arises when a legal individual claims that he/she has been affected by the actions of another business or individual and seeks the court for relief by filing a complaint. Most of the civil lawsuits are directed by the Code of Civil Procedure.

In a civil lawsuit, six main stages are involved. They are-

Pre-Filing- The pre-filing stage comes when a dispute arises between both the parties and make demands, try to discuss the matter among themselves without taking any legal recourse. If both the parties fail to reach a resolution then they will prepare for the possibility of a court action.

Initial Pleading- In the initial pleading one party files documents i.e., a complaint to commence the court action, and the other party files their reply to such complaint

Discovery- In the discovery stage, both the parties will exchange the documents and responses filed by them in court and learn about the plus points and minus points of the other party.

Pre-Trial- In pre-trial, both the parties will start preparing for trial, they get their witnesses and evidence in order.

Trial- During the trial, the case will be heard by the judge or a jury, the evidence is presented, witnesses are examined and the case is decided and judgment is given.

Post-Trial- During post-trial, one or both of the parties can file an appeal challenging the given judgment.

Not all the civil case follows these above stages. Some civil cases follow some different procedures present in the Code of Civil Procedure.

There is a comprehensive process laid down in the Code of Civil Procedure, for filing the civil case. If the process is not followed properly, then the “registry” possesses all the right to dismiss the civil lawsuit. “Registry means an office which in every court which provides the information regarding any court matter and court forms”.

Any act or omission which is prohibited and punishable by law is considered as a crime. For such crimes, punishment is decided by the following procedures of the criminal trial. The criminal trials in India are well established administrative, statutory and judicial framework. Criminal law on a whole consists of three main acts. They are-

Code of Criminal Procedure is a procedural law for conducting the criminal trial in India. This procedure consists of the manner for examination of witnesses, collection of evidence, interrogation of accused, safeguards, arrests and procedure to be adopted by police and courts, the process of criminal trial, bail, a method of conviction and the rights of the accused for a fair trial by the principles of natural justice.

Indian Penal Code is the main penal law of India, which is applicable to all offences. Indian Evidence Act is a wide-ranging, treaty on the law of evidence, which can be helpful in the trial, the way of production of the evidence in the trial and the evidentiary value which can be added to such evidence.

Criminal Trial is of three types according to the Code of Criminal Procedure. They are-

According to section 2(x) of Code of Criminal Procedure, 1973 a warrant case is generally related to offences which deal with the death penalty, life imprisonment or imprisonment exceeding two years. The trial in warrant cases starts with filing a complaint before a magistrate or with filing an FIR in a police station. If the magistrate is satisfied with the fact that the offence is punishable for more than two years, he/she sends the case to the sessions court for trial. The process of sending the case to the sessions court is known as “committing it to sessions court”.

According to Section 2(w) of Code of Criminal Procedure, 1973, the cases involving the offences which are punishable for less than two years are known as summon cases. A summon case does not require the preparation of the evidence. But a summons case can be converted into a warrant case anytime by the magistrate if he/she thinks that the case is not a summon case.

The summary trial procedure is mentioned in section 260 to section 265 of the Code of Criminal Procedure. Cases which basically take one or two hearings only to decide the matter comes under this trial. The summary trials are generally reserved for small offences to decrease the burden on courts and to save money and time. The cases in which an offence is punishable with less than six months of imprisonment can be held in a summary way.

So, this is the difference between the civil lawsuit and a criminal lawsuit.

Published in Featured, lawyer and legal