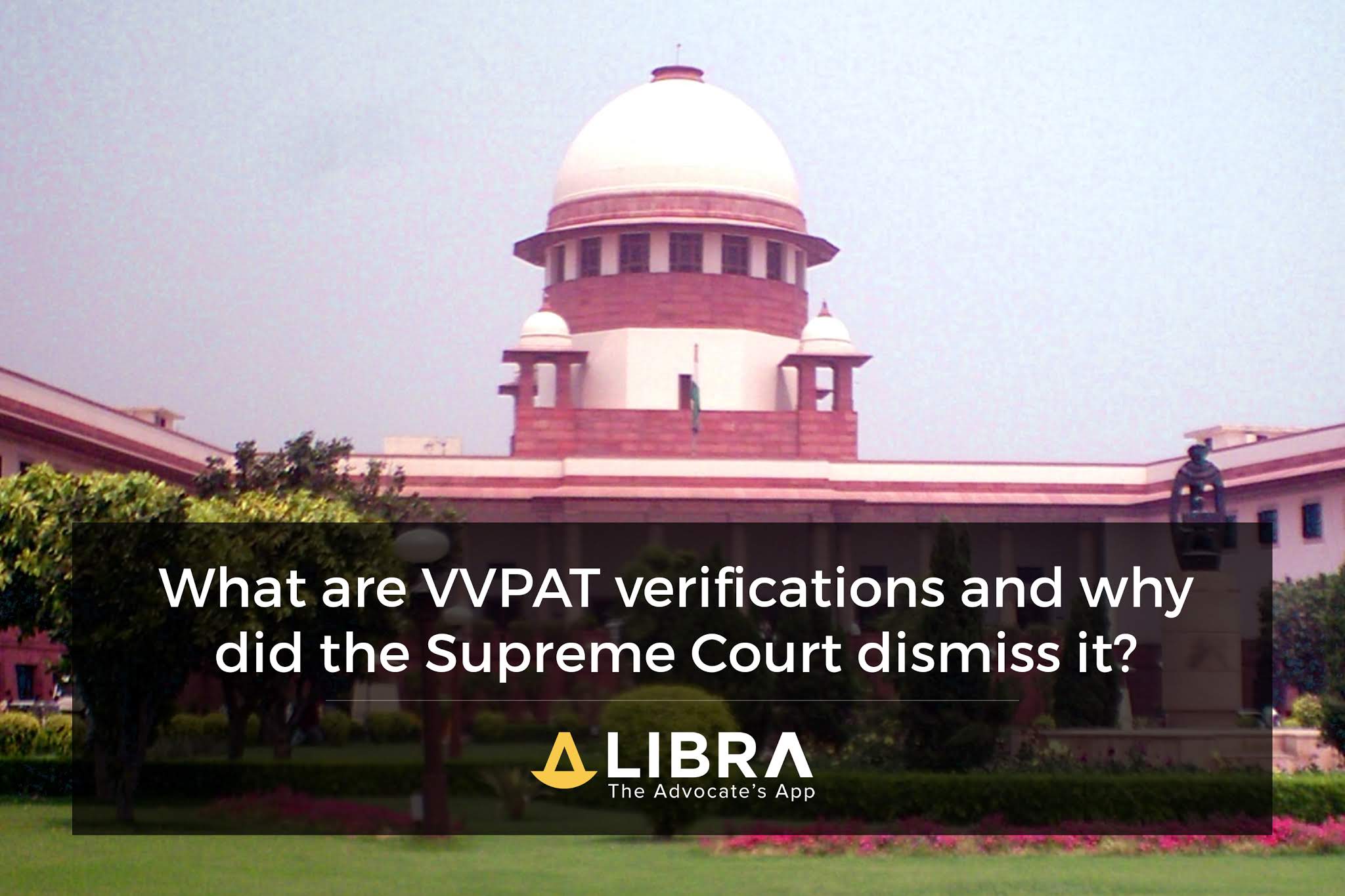 What are VVPAT Verification and why did the Supreme Court dismiss it?

The Voter-verifiable paper audit trail (VVPAT) or verifiable paper record (VPR), as it is called is a feedback mechanism. It is a method used by the voters to give in their feedback on the system using a ballotless voting system. Apart from being a feedback mechanism per se, it is also an independent verification system, which is done at the level of the voter, wherein they can check whether there exists or not any fault with the EVM Machine or not by verifying that their vote was cast correctly, to detect possible election fraud or malfunction, and to provide a means to audit the stored electronic results. A VVPAT contains the following information:

There has been a likeliness of using the VVPAT because unlike the electronic manner of recording the votes, this is one way which is readable by the human eye and wherein the voters can directly see their vote reflecting and being counted. This is one of the many steps taken by the Election Commission in order to ensure a free and absolutely transparent procedure of elections, taking place in the country. With the Lok Sabha election witnessing the highest turnout ever in the history of elections in India, a Chennai based organisation- ‘Tech for All’ filed an urgent plea before the Supreme Court of India with the request that there be Voter Verified Paper Audit Trail (VVPAT) verification of all Electronic Voting Machines (EVMs). They put forth that the EVMs are not reliable and vulnerable to tampering. As a long term solution, they sought for replacement of EVMs with Optical Ballot Scan machines. With regard to the present general elections, they sought for subjecting all EVMs to VVPAT verification. Earlier, a matter of similar nature was already taken up and decided by the court under the leadership of CJI Ranjan Gogoi. This became the main bone of contention for the apex court of the country in dismissing it. The apex court remarked:

“The CJI had dealt with this matter. Why are you taking chance before a two-judge vacation bench…We cannot override the CJI’s order… This is nonsense. The petition is taken on board. Dismissed,”

In  the earlier decision of the Chief Justice of India regarding this matter, the apex court had passed its decision and directed the Election Commission to increase random matching of VVPAT slips with EVMs from one to five polling booths per assembly segment in Lok Sabha polls, saying it would provide greater satisfaction not just to political parties, but also to the entire electorate. On this matter, there were remarks from across the globe. PDP president Mehbooba Mufti remarked on the situation by sending out a tweet, which reads as follows:

‘Worrying that despite solid evidence about EVMs being switched, @ECISVEEP has not clarified any of these concerns. A farcical wave backed by dubious exit polls followed by manipulating EVMs is another Balakot in the making.’

After the rejection of the plea on grounds of lack of merit, the opposition parties agitated and thus have asked the Election Commission to frame new rules to deal with the counting of votes in constituencies where VVPAT votes do not tally with EVM figures. Abhishek Singhvi, a Congress leader remarked about the situation as follows:

‘We have asked EC to frame clear rules on how to count votes in constituencies even if discrepancies are less than 5% after VVPAT-EVM matching. If such cases arise, VVPAT slips should be matched with EVM results in the entire constituency….Since the SC has agreed with our primary demand for VVPAT counting, we have also made a moral appeal to the Election Commission to increase on its own number of VVPAT counting in view of the widespread demand, as 21 opposition parties represent more than 70% of the whole electorate.’

TDP leader, N.Chandrapradu Naidu also took the situation in his grasp and said that it is the duty of the Election Commission to take full responsibility for honest execution of the Supreme Court’s April 8 order. In case of any discrepancy, voter-verifiable paper audit trail (VVPAT) slips should be matched with EVM results in the entire constituency.

Published in legal, legal news and tips and guides